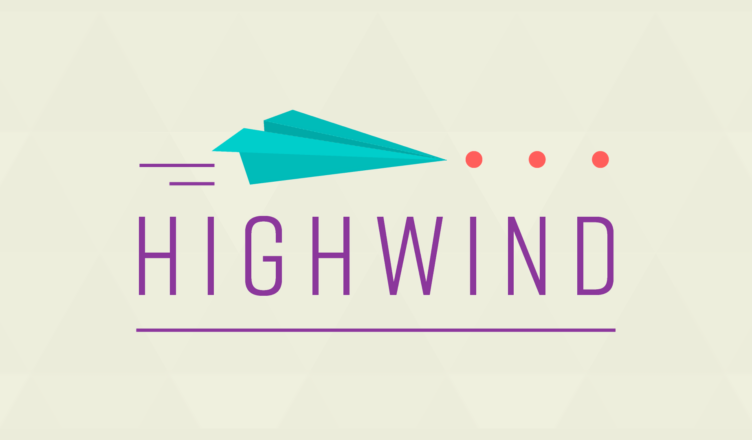 Highwind is a shoot-em-up game by Selva Interactive for mobile, where you play as a paper plane that can shoot either bullets or lasers. It is currently free for five days (at least on Google Play, the Apple App Store just says it’s free), and seeing the genre of the game, I spared no time to download it and play it.

The shooting phases are simple with no dodging required. You just need to shoot enemies before they shoot you and use your shield. You have a bar for ammo and a bar for the shield, both of which recharge with time, so it’s wise to use them when you can nail a shot or when an enemy bullet approaches you.

To liven things up, the game throws different elements into most of the levels you’ll be traveling through. For example, there may be speed pads which can speed or slow all bullets (depending on direction), or rings that teleport your shots or a rotating arrow which changes the direction of the shots. These change how you approach any level.

Below your paper plane is a health bar, which shows you how many hits you can take before the game is over. By the end of each level, you will get the chance to upgrade your plane’s maximum health, shield recharge time or ammo recharge time. By the end of some levels, you also get the chance to enable a special upgrade for your plane, such as an additional shield, or double reflection of bullets. The minigames are basically just bonus rounds, where you collect coins and dodge everything else.

The game has several modes (such as one where you shoot lasers instead of bullets, or an endless mode) which you unlock by playing the game and racking up the score in your runs, as well as several planes with different looks and stats. It also has leaderboards and a couple of simple achievements.

The music is simple, nice to listen to, and doesn’t detract from the action. The art is one thing I like about the game. It reminds me of games such as Monument Valley.

My only complaint about Highwind is how the action can be slow at times. As you cannot move in the shooting parts and therefore can’t aim precisely as you would in other shooters, it may be a while before a level is finished. Fortunately, you don’t have to destroy all the enemies in most levels. However, in boss levels, you need to defeat the “boss” before continuing to the next level.

I’d recommend Highwind if you want a simple shoot-em-up that’s built for mobile. With various modes and unlockable paper planes, the game will keep me busy for a while. Get it while it’s still free from Google Play or the Apple App Store.

You can click here to read about other mobile games, or here for free games in general.