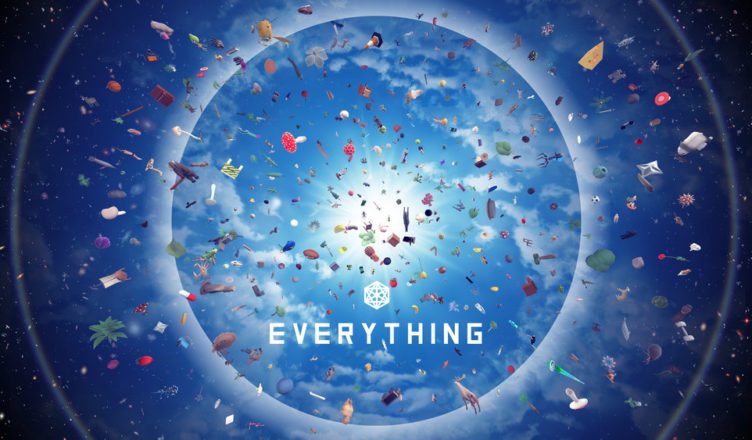 “This is the real secret of life — to be completely engaged with what you are doing in the here and now. And instead of calling it work, realise it is play.” Alan Watts

Everything, by David O’Reilly, is a relaxing, sandbox game in which you can explore worlds in minute detail or from a grand galactic perspective, becoming anything and everything you encounter along the way, from bacteria to black holes.

It was confusing at first as it wasn’t immediately obvious what to do, but the actual answer to that is – not a lot (and that’s okay).  Visually, the game is very relaxing, with a soft colour palette, smooth lines, a comfortable movement pace and unintrusive music and sounds effects that are relaxing and sometimes mystical. The gameplay is minimal, but this adds to the experience and I found it strangely hypnotic.

When they say ‘Everything’ they’re not far off. There are numerous environments at varying scales, all filled with a plethora of objects. At different points during my game, I was a piano, a tree, a rock, a giraffe, a planet, a galaxy, a virus – the list is endless. Different object categories have their own movement style and this can get pretty surreal, especially when paired with the ability to sing, dance, group up and resize.

“Without others there is no self, and without somewhere else there is no here.” Albert Camus

Camus is but one of many influential philosophers referenced in this thought-provoking indie game. As well as being able to listen to your own thoughts and those of the things around you will also encounter snippets of 1960’s lectures from Alan Watts, often considered among the first to interpret Eastern philosophies for a Western audience.

Watts draws on Freud, talking extensively about anxiety and neurosis, citing the ego as a primary source. However, much like empiricist David Hume in the 1700s, Watts denies the existence of an enduring self and argues that the ego is but an illusion. He suggests a more interconnected view of the universe and of identity, suggesting that we ‘come out the world’ rather than into it.

Everything is entrancing, beautiful, serene and absurd but also provides a perfect backdrop for Watts’ philosophical commentary. I have spent 10 hours in-game so far and have been 526 things (or 37%), and it’s such a relaxing experience, I am sure I will spend a few more hours exploring.

If you’re after something chilled but thought-provoking I’d definitely recommend this game. Additionally, for a slightly different philosophical experience, take a look at Thing in Itself, a short game based on the works of Immanuel Kant.

2 thoughts on “Reviewing Everything – Gaming gets Philosophical”