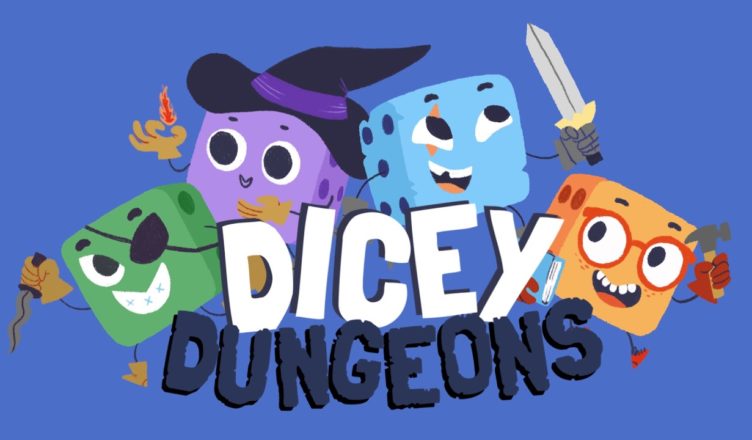 Dicey Dungeons is a game best described as a dice-based, turn-based, rogue-like RPG by Terry Cavanagh (designer), Marlowe Dobbe (artist) and Chipzel (musician), and Terry’s third commercial game after the indie classics Super Hexagon and VVVVVV. In the game, you get to play as six different contestants who get turned into die in Dicey Dungeons, hosted by the tyrannical Lady Luck. The game started out as an idea for a seven-day game jam before evolving into a commercial game, and it is very different from Terry’s previous commercial games, both graphically, in gameplay and content. As a fan of Terry’s work, especially VVVVVV, I couldn’t let the game go unreviewed. Whereas skill was the game in Super Hexagon and VVVVVV, luck is what will decide whether you win or lose. And that is where the game gets both its charm and its frustrating nature.

The game starts with an introduction to the basics of the game, which does a swell job of telling you how things work in the Dungeons. The gist of it is that each of the six contestants has their own equipment, which is used by consuming the dice you rolled. Depending on the dice rolls, you can win or lose a fight. When you take enough damage, you’ll be able to execute a “Limit Break” which is one of your character’s special abilities. In each playthrough, you will fight, open chests, buy from stores, and trade your equipment through six floors, ending with a boss fight. There are also “episodes” in which the game may enforce house rules that make things easier or harder, such as inflicting the Curse status ailment every turn (which forces the equipment you use to vanish along with the dice) or losing 2 max HP at every level up.

Depending on the character, episode and Lady Luck, you may either breeze through the entire six floors, or slowly but cautiously advance. There is a level of strategy involved, like knowing what enemy is weak to what element, or what is the enemy’s worst attack and how to weaken it. To make things harder, some equipment accepts specific dice; some allow no higher or lower than a certain face value, and some are only okay with odd or even dice.

The game certainly isn’t fair and not for everyone, with Lady Luck even asserting as much. As each character has a completely different playstyle from another character, some are harder; for instance, I found Thief to be weak because of his reliance on low values, despite his excellent dice manipulation equipment such as duplication and splitting of dice. Some fights are overpowered and may make or break your playthrough; the Kraken enemy can kill you with even rolls, and he can roll five dice (he is nerfed in the 1.3 update which I haven’t had the chance to play). The equipment you find and take with you in a battle can give you a slight edge, but finding decent equipment still relies on your luck. You will lose over and over before you clear an episode successfully, of which there are 36 episodes.

The game however does balance this difficulty out. Some enemies show up in many playthroughs, making studying them an essential part of getting past them with the least losses. As you play, you get the hang of your character’s playstyle and what equipment set is most optimal. Playing further into the game, I can see that some things change; for example you never get to encounter a specific enemy again if you fight them as the playthrough’s final boss.

The art style and direction are also radically different from Terry’s usually retro-styled games. Everything in the game is vibrant, colorful and expressive. The designs of the characters are fantastic, my favorite being Lady Luck The animation is smooth and cartoony, which makes every character and enemy in the game unique. Dicey Dungeons makes great usage of colors to differentiate between equipment, such as green for passive equipment or purple for equipment inflicting poison.

The music is excellent and emphasizes the game’s quick pace and its quirky nature, with chiptunes and instruments like trumpets. It has a variety of tracks for many occasions, although the battle themes can get repetitive. The sound effects are also great, with each character having sound blurbs when they talk or get attacked. Hearing the crowd “woo” in amazement at a strong attack always feels good.

The game has a modding system which allows you to change various aspects of the game without replacing the game’s default files, which themselves are viewable by the user in the game’s directory. The game also has a mod loader built into the game itself, available by viewing the settings. One thing I like about the modding system is that it does not use Steam Workshop, which means that mods must be uploaded to platform-independent mod sites like Nexus and thus are available to the itch.io version of the game, and I hope Terry keeps it this way.

While the luck-based nature of the game means it’s not for everyone, I enjoyed what I saw of Dicey Dungeons, and I had no problems trying again and inevitably failing until I nailed it. I can’t wait to see what Terry Cavanagh has in mind for the game’s updates, and I would love to see the game on mobile.

Do you have a question about the game? Ask away in the comments!
Interested in another rogue-like game? Check out our review of Shortest Trip to Earth!