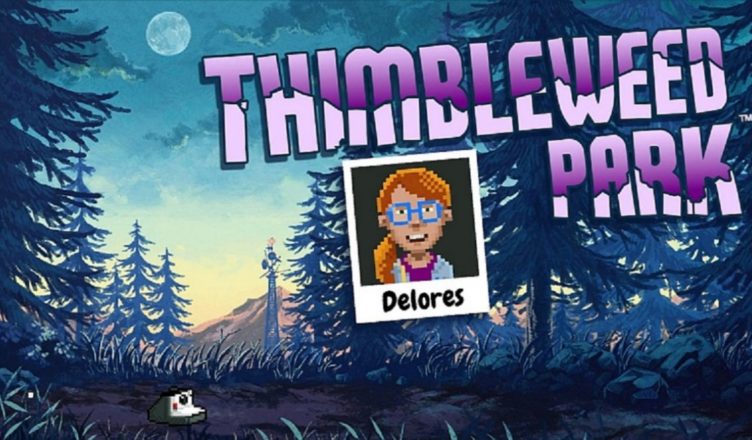 “Maybe this isn’t home, nor ever was, maybe […] home is the place where when you go there, you have to finally face the thing in the dark.” – Stephen King, It

Delores began life as a prototype for Ron Gilbert’s new game engine and gradually developed into a mini-adventure game. It is a Thimbleweed Park side-mission rather than a sequel and was released as a thank you to fans and as ‘something to have fun with in these odd times‘.

While it is not necessary to have played the original game, there is plenty of fun familiarity for players returning to Thimbleweed park as Delores Edmund. On vacation from her job as a game developer and making some extra money working for the local Nickel News, she must embark on a series of photographic scavenger hunts in a bid to find out what’s been going on in town.

At the start of the game, Delores is given an assignment list of five photos needed to accompany specific local news stories. This photographic scavenger hunt makes up the bulk of the gameplay, requiring players to explore the town, interact with residents and solve little puzzles in order to take the correct pictures.

On completion, the game will close suddenly, however, replay is intended as there are a total of six assignment lists with thirty photos that Delores needs to take. The puzzles get increasingly tricky as the player progresses through the lists but rely largely on information that can be gathered through exploration and don’t pose much of a challenge.

There are a number of familiar faces, locations and specks of dust for those who have played Thimbleweed Park, though not everything has stayed the same (last time I checked, the S&D Diner didn’t serve Kobe beef). Throughout the course of the game, the player is given some insight into how the town and characters’ lives have progressed. Additionally, a vague overarching narrative is revealed upon completion of all thirty photos and it is at this point the game actually ends and the somewhat amusing credits are shown.

As an engine prototype limited by current restrictions, Delores has no voice acting and all its audio and visual assets are borrowed from Thimbleweed Park, however, this is done is a way that feels fresh rather than tired or repetitive. The familiar pixel art and music are just as enjoyable in this short reiteration as they were in the original game.

Delores is a fun little experience for Thimbleweed Park newcomers and aficionados alike; with simple puzzles, fleeting narrative elements and potentially nostalgic aesthetics. Its intended replayability means it can provide 3-4 hours of casual but engaging gameplay at zero cost, making it easy to recommend.

Enjoy pixel art in games? Take a look at Coffee Talk for a narrative-focused experience or I Fell from Grace for more point-and-click puzzles!