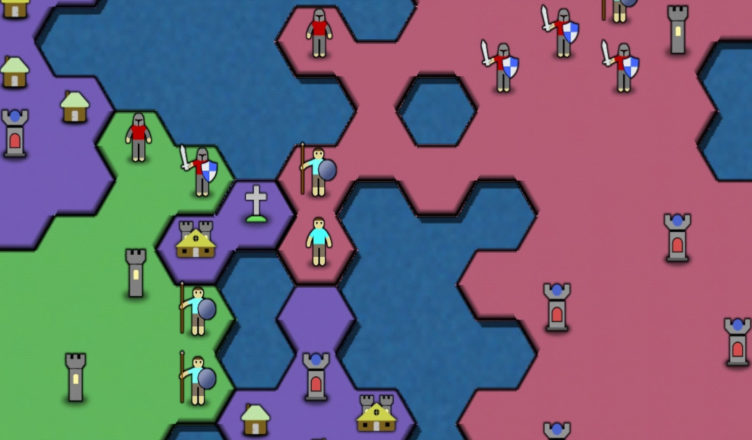 Let me preface by saying that I don’t like free-to-play games. Apart from being prevalent, the lack of filtering options in Google Play’s search makes it very hard to run into completely free games on Android. I had stumbled upon Antiyoy by chance, and I have to say that I like the development.

Antiyoy is a mobile, hex, turn-based, strategy game inspired by Sean O’Connor’s Slay. At a download size of only 7.1MBs, it’s a game that excels in its simplicity, completely free and open-source with no ads or in-app purchases, or even permissions or trackers to speak of.

In Antiyoy, you own one or more chunks of land, which produce money. Using this money, you can buy units to expand, defend your land, and fight enemy units, or build farms to generate more money, or towers to protect your lands from enemy units. Units need money to prevent them from starving, and should you have negative production, you will lose money until you have none left and your units starve to death. All players play in rounds and have the choice to undo their changes if they don’t end their turn. That’s all the basics of the game.

On paper, this sounds easy, but the difficulty will come from the enemies and the formation of the land, and how you manage your units and money. If you occupy land in the middle of the map, while the enemies occupy the edges, you will have a hard time with growth and would need to build more towers to protect you. Or if an enemy occupies a peninsula with a tight entrance, they have an advantage as they only need to worry about attacks from only one direction. Dotting your land with towers is a surefire way to slow down the enemies, especially since they’re fans of deploying several peasant units (the lowest tier of units) to cut a part of your land off and threaten your units with starvation. There’s also building farms to quickly get enough money to build expensive and powerful units in a timely manner and defending them, so the enemy doesn’t force your production down to negative figures and starve your troops.

The game always encourages you to turn into a superpower before anybody else. If you leave a nation alone, it may become a superpower, and then you will have a very hard time going up against them as they typically have a strong economy, allowing them to always retaliate and stop your advances.

Depending on how you play and the map type, a typical session can take five minutes or even half an hour. This ultimately lies down to the variables of the maps. You can play a skirmish against AI players, engage in 7-player hotseat multiplayer, or watch the AI duke it out (a feature I appreciate seeing in competitive games). You can also decide the size of the map and the difficulty. You can engage in a campaign of 119 levels of increasing difficulty. If none of these appeal to you, there is even a level editor as well as user levels to choose from, on top of saving and loading replays. For a completely free mobile game, that’s a lot of value.

Antiyoy also offers some customization options, for both gameplay and visual elements. You can change the skin of the game if you don’t like the default (the newly added Jannes Peters skin is one I like), and you can change the game to the Slay rule-set instead of the normal one, and enable diplomacy so that you can be friends with another nation.

For a completely free mobile game, Antiyoy offers a lot of value. Despite being mechanically simple, the game knows how to keep you cautious the whole time. It is one of the games that I will always keep installed on my devices.

You can read about other free games here!